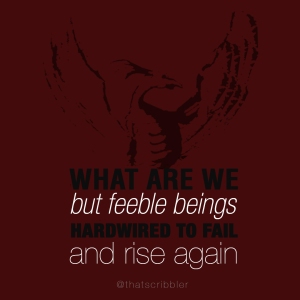 Listen the whispers in these serene winds,
Hear the hollow cries among solemn fiends.
Returns the dusk and the songs of ages,
A lamentation long lost, forgotten, and faded.
Fear the wheel of time that now turns,
Fear the dusk, for darkness it beckons.

I am a God

I am a Sage

I am the void

I am the need

I am the pain

I am the greed

I am the con

I am the law

I am the flaw

I see the winds

I hear the light

I speak in colors

I taste the sight

I am the end

I am them all

So long as I pretend

This is one of my earlier posts, revisited with the scribble.

Closer every second, with

The cold bite of death

My second Inktober entry also works as a character sketch for the book I’m trying to write for NaNoWriMo this November. Or at least that’s what I like to tell myself. As I said earlier, I’m a pretty good procrastinator. 🙂

And while I was at it, I also tried a few other warrior sketches (also with an ink ((also not that perfect)) )…

Thanks for stopping by and reading, you guys! I can’t thank you enough for this.

Have a great weekend!

Against the winds a wither night,
Scurried a silver knight
Forged of courage and made of steel
Seamless was his might
Vigil and silent,
Like Shadows he walked
A lone drifter, a dark shifter
With a free heart he stalked

This sketch was my attempt to participate in Inktober, which, apparently, is a big event on YouTube where you sketch everyday with any form of ink (thanks to the lovely blogger at fictionistasan for letting me know about this, and tempting me enough with her beautiful art to try it).

Not sure if it counts, but I used a ball pen. It was my first time scribbling with anything other than a pencil so it felt a bit awkward in the beginning. Obviously, I have a long way to go before I finally get it right.

But I did enjoy myself.

“To be conscious that you are ignorant of the facts is a great step to knowledge.”

Plant the seed of ignorance
It inspires us to ask
Questions that truly matter
Questions that often go amiss
Right questions
Or even the wrong ones!
It gives us
More than knowledge
It grows us
The tree of wisdom!

Today’s scribble is a consequence of this article I stumbled upon. If you have time, do give it a read.

Also. Sorry for a slight delay in the new post… but it’s been those kind of days… 🙂

Today, I want to tell you about the Mystery Man.

I call him so because I don’t know him much.

I only see him.

I think he must be around 70 years.

Why does his age matter more than any of his other description?

Because in this part of the world, where getting over 60 is automatically assumed as a period to rest on your laurels, the Mystery Man is here to learn something new. Something completely alien.

Something complicated and difficult even for us — the so called young ones.

He is here to learn 3D designing.

And I see him drawing 3D cubes. Everyday.

The secret of genius is to carry the spirit of the child into old age, which means never losing your enthusiasm.

Mystery Man is lean, almost sickly. His skin is wrinkled. And he is dressed in the most mundane of ways you can imagine.

His bespectacled eyes, though. They are so… rich. Satisfied. Happy.

A part of me wonders whether he is alone or has a family. Because, generally, in our culture, when a person grows old, his children take care of him (and they, mostly, do this out of love rather than compulsion).

So does he not have any children? Or are they just away? What about his wife? Is it just a hunger for knowledge that brings him here? Or did some unfortunate event force him to take up the challenge?

And I want to thank him for unintentionally giving me a renewed determination, confidence, and a true motivation.

All I do is watch him.

Watch him squint his eyes at the computer screen as he fumbles with his mouse, hovering the cursor over complex software buttons.

Watch him frequently adjust his spectacles and smack his lips with an unhurried dedication toward building his cube.

Watch him triumph with a smile on his face.

Age is an issue of mind over matter. If you don’t mind, it doesn’t matter.

There is a fountain of youth: it is your mind, your talents, the creativity you bring to your life and the lives of people you love. When you learn to tap this source, you will truly have defeated age. 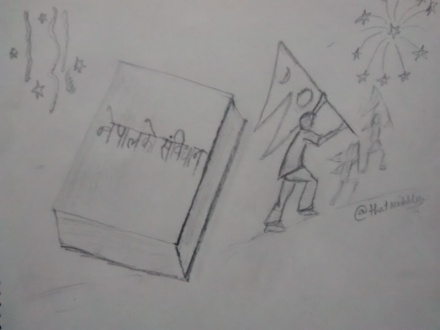 The text on the book says: “Nepalko Sambidhan” or Nepal’s Constitution. Apparently, it has turned out to become one of the thickest constitutions in the world!

Might not be much of a change
Might not mark much drastic turn of events
What it is, is just a start
But a start was all we ever needed

The nation celebrates to the late hours of the night. I can still hear the cheers and screams of joy! Today is a big day for my country.

After years of struggle, domestic conflict, instability, and discussion, our President announced Nepal’s first-ever constitution that was issued by the direct involvement of the public.

“Nepal’s Constitution 2072” (Nepalko Sambidhan) comes as a beacon of hope for a better tomorrow. (And a subtle, if little, distraction from the pain of the dreadful #MegaQuake that struck early on in the year).

It might not be the most perfect of constitutions that could’ve been written (mainly because of a huge number of people that still disapprove it), but hopefully, the current government will soon be able to address their issues in time, and lead us all, together, to a better and brighter future.

And as always, thanks a bunch for reading!

You wake up at 7
Go learn something new
A class, a lecture, or a stroll through the nature
Whatever

You do this up until the day job begins
Somewhere around 10, maybe
Then for over next 10 hours or so
You work your socks off
Say till around 9?

So you go on
As long as its possible
Defying the science of stupid
Ignoring the discomfort
Embracing the fear
Accepting uncertainty
You keep at it
Whatever it is that you love
Draw, write, compose?
You stick to it
And flesh out your creation
You cure your itch
Until that devil Passion is satisfied
Until it finally allows you to sleep
And sleep you do!
Oh so soundly

Until the next morn
When you wake up at 7

The answer is for you to decide. Will you ever burn out?

Hey, life!
Do me a favor, will you?
Just this once,
For just this day.
Could you be a sport…
And stay the hell out of my way? 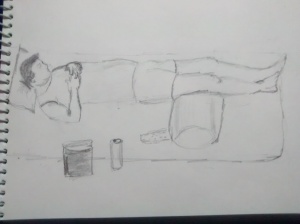