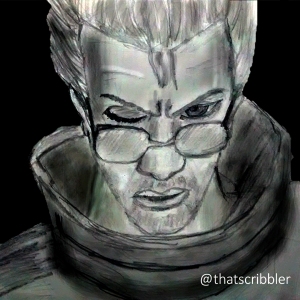 Listen the whispers in these serene winds,
Hear the hollow cries among solemn fiends.
Returns the dusk and the songs of ages,
A lamentation long lost, forgotten, and faded.
Fear the wheel of time that now turns,
Fear the dusk, for darkness it beckons.

Blackbirds by Chuck Wendig
My rating: 4 of 5 stars

Ladies and gentlemen, filthy boys and snarky gals! Presenting… Blackbirds, a book that reads out like a charm!

Okay, it doesn’t. It actually reads out like a derailed train set on a collision course. It’s a grim, super fast-paced story set in an even grimmer world, where each character is more flawed than a Nepali politician. Not the least of whom is our protagonist, Miriam Black.

But. It only makes this book so much more interesting.

Coming back to Miriam Black… What a superb character she is! Probably one of the most awesome female protagonists I’ve read in years. In fact, she is one of the major reason why I so much loved the book.

My version of Miriam! (based on an image I found on the internet)

The story is okay for me. But it’s the narration that tops the chart. I’ve always been a fan of Chuck Wendig’s writing style and that no-nonsense, kick-in-the-guts, fist-in-the-teeth attitude in his voice. I came to Blackbirds expecting all of that, and, of course, I wasn’t disappointed.

If you love a witty thriller with a touch of fantasy, set in a dark world, full of low-life villains and filthy-tongued heroes, this book is most definitely for you.

View all my reviews

My first Digital Painting (drawn from scratch!). Yay for me!

Would we crave for light the way we do
If there never was a moment dark?

And would we be happy the same way
If we didn’t know what it meant to be sad?

Questions exist to be answered
Complications are there to be solved

Challenges arise to be conquered
Failures are there to be won

The Yin Yang of life is beautifully simple
Yet, the Yin Yang remains unknown

The inspiration for the above poem, of course, comes from the “Tao Te Ching” by Lao Tzu. But no words can truly explain this duality of things than the immortal words of Lao Tzu himself. So I must leave you with this excerpt of “Tao Te Ching” (Translated into English by Derek Lin):

“When the world knows beauty as beauty, ugliness arises
When it knows good as good, evil arises
Thus being and non-being produce each other
Difficult and easy bring about each other
Long and short reveal each other
High and low support each other
Music and voice harmonize each other
Front and back follow each other”